Degaussing magnetic data is the process of decreasing or eliminating a remnant magnetic field.

Data is stored in the magnetic media, such as hard drives, floppy disks, and magnetic tape, by making very small areas called magnetic domains change their magnetic alignment to be in the direction of an applied magnetic field. This phenomenon occurs in much the same way a compass needle points in the direction of the Earth’s magnetic field. Degaussing, commonly called erasure, leaves the domains in random patterns with no preference to orientation, thereby rendering previous data unrecoverable. There are some domains whose magnetic alignment is not randomized after degaussing. The information these domains represent is commonly called magnetic remanence or remanent magnetization. Proper degaussing will ensure there is insufficient magnetic remanence to reconstruct the data.

Erasure via Degaussing magnetic data may be accomplished in two ways: in AC erasure, the medium is degaussed by applying an alternating field that is reduced in amplitude over time from an initial high value (i.e., AC powered); in DC erasure, the medium is saturated by applying a unidirectional field (i.e., DC powered or by employing a permanent magnet). A degausser is a device that can generate a magnetic field for degaussing magnetic storage media 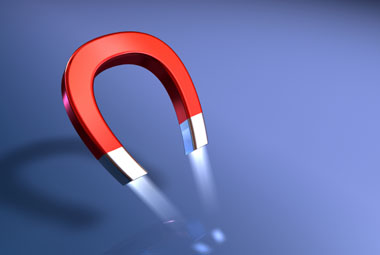 Irreversible damage to some media types

Many forms of generic magnetic storage media can be reused after degaussing, including audio reel-to-reel tape, VHS videocassettes, and floppy disks. These older media types are simply a raw medium which are overwritten with fresh new patterns, created by fixed-alignment read/write heads.
For certain forms of computer data storage, however, such as modern hard drives and some tape backup drives, degaussing renders the magnetic media completely unusable and damages the storage system. This is due to the devices having an infinitely variable read/write head positioning mechanism which relies on special servo control data (e.g. Gray Code) that is meant to be permanently embedded into the magnetic media. This servo data is written onto the media a single time at the factory using special-purpose servo writing hardware.

The servo patterns are normally never overwritten by the device for any reason and are used to precisely position the read/write heads over data tracks on the media, to compensate for sudden jarring device movements, thermal expansion, or changes in orientation. Degaussing magnetic data indiscriminately removes not only the stored data but also the servo control data, and without the servo data the device is no longer able to determine where data is to be read or written on the magnetic medium. The medium must be low-level formatted to become usable again; with modern hard drives, this is generally not possible without manufacturer-specific and often model-specific service equipment.

Hard Disk Erasure is the method of securely remove data from hard disk while keeping the hard drive functioning or reusable. If you need to erase the data on a SCSI, IDE/PATA, SATA, laptop or SAS hard drive and then reuse or recycle hard drive, Data Devices’ line of DOD-approved hard drive erasers overwrite and erase the data on the drive, ensuring complete data security. The DOD-approved application WipeOutoverwrites and erases the drive 8 times. This guarantees the original data on the drive is unrecoverable to Department of Defense specifications. These units come standard with WipeOut Fast, which provides fast and comprehensive erasure. Our line of hard drive erasers and duplicators also supports solid state flash memory.

DT Asia provides an ISO 9001 Certified for high quality Secure Electronic Data Erasure Services on any storage media such as PATA, SATA, or SCSI. There are many options of hard disk erasure. One of it is Software Erase, by overwriting the sector of the disk with a new value with certain amount of passes to ensure that the data is harder to recover. But we also provides a better option than software erase, “Secure Erase” which initiate the drive internal secure erase command, security erase unit, based on the ATA specification by the T13 technical committee.

If you have any request on data removing / restoring and degaussing, especially Hard Disk Erasure, please contact DT Asia for a help.

Degaussing is a separate process from the computer system. It is a process that utilizes a machine to produce a strong electromagnetic field that destroys magnetically recorded data on a magnetic media. (E.g. hard disk and tape media…)

Who and Why degaussing is needed for your media?

• Radio/Television broadcasters: enables expensive tapes to be re-used.
• Computer departments of corporations: allows re-use of back up tapes and safe disposal of information from PC hard drives.
• Data Storage Companies: data no longer needed can be easily and efficiently erased.
• Defense Organisations: confidential and top secret information can be erased.
• CCTV Operators: allows VHS tapes to be re-used again and again.
• Audio/Video duplicators: allows re-use of any production over runs and returned out of date tapes.
• Financial Services: Banks and insurance companies can use a degausser to re-use magnetic media for voice logging systems.
• Emergency Services: Re-use tapes used in voice logging systems.
• Hospitals: erase sensitive information held on magnetic media, such as patient records no longer required.
• Universities: allows student records that are no longer needed to be erased.

One of the key solutions to eliminate the risk of data falling into the wrong hands is to degauss hard drives prior to disposal. Hard drive degaussers use powerful magnets or an electromechanical “pulse” to erase data from hard drives. Similarly, tapes should also be properly degaussed before disposal.

In fact, DoD Requirements call for hard drives to be degaussed in an NSA listed Degausser and then physically destroyed prior to disposal.

Destroying CD/DVD Optical Media doesn’t have to be a problem.

Data Terminator has a variety of machines to meet NSA/CSS Specifications for CD/DVD Optical Media Destruction.

Proper IT asset disposal is becoming more and more important not just on the environmental issues but also on data confidentiality.

Many organizations do not have the dedicated resources or the bulk quantity to justify the investment of procuring the equipment. They may choose to outsource such destruction and disposal. Outsourcing can be affordable and safe when done properly. If you choose this option, ask what methods will be used, where your items will be kept prior to destruction, or if there are any on-site services, what happens to destroyed waste, and what proof you will get that those items were actually destroyed.

Data security is an ongoing process, by being aware of the threats and understanding the destruction options, you will be in a much better position to protect your business and yourself. You will have complete peace of mind that you have left nothing behind.