What is data erasure and how to do it

What is data erasure?

Data erasure is a software-based method of overwriting the data that aims to completely destroy all electronic data residing on a hard disk drive or other digital media by using zeros and ones to overwrite data onto all sectors of the device. By overwriting the data on the storage device, the data is rendered unrecoverable and achieves data sanitization.

Permanent data erasure goes beyond basic file deletion commands, which only remove direct pointers to the data disk sectors and make the data recovery possible with common software tools. Unlike degaussing and physical destruction, which render the storage media unusable, data erasure removes all information while leaving the disk operable. New flash memory-based media implementations, such as solid-state drives or USB flash drives can cause data erasure techniques to fail allowing remnant data to be recoverable

Why should data be erased?

Companies, no matter whether they are part of a large corporation or a smaller business, would definitely need to use a professional data erasure method if they want to ensure that their data doesn’t fall into the wrong hands.

Due to legal and internal regulations, data should be erased at the end of its so-called lifecycle. There are a number of existing national rules, regulations and laws that already require companies to comply with data protection measures, and also with data erasure.

No matter what method of data erasure is used, it should always be part of a consistent process and take into account some basic points. A rule for the secure disposal of old devices should be put in place and – this is the actual core issue – also be respected. It should also be clearly specified who is responsible for the actual data erasure and who for checking it. Because from the perspective of compliance, these tasks should be the responsibility of different people. And finally, companies should never forget that data erasure is not a bothersome imposition but something crucial for the welfare of the company.

There are some reliable and inexpensive ways to have data erased securely, and above all, irrevocably. If the data storage device is no longer to be used after erasure, there are two possible methods: either demagnetization using a Degausser or mechanical destruction in a so-called shredder. Both solutions work well in case of defective equipment and when the hardware necessary to access the data no longer exists. However, those responsible have to understand clearly that afterwards the media become absolutely unusable.

Degaussing does, unfortunately, have a couple of disadvantages. For a start, it’s effective on magnetic media and magnetic media only. A degausser might be powerful enough to wipe a 100-terabyte hard drive but put a flash storage device in there and it’ll come out unharmed.

Secondly, degaussed hard drives can’t be reused, so it’s not an ideal solution for companies looking to recycle or sell their hardware. 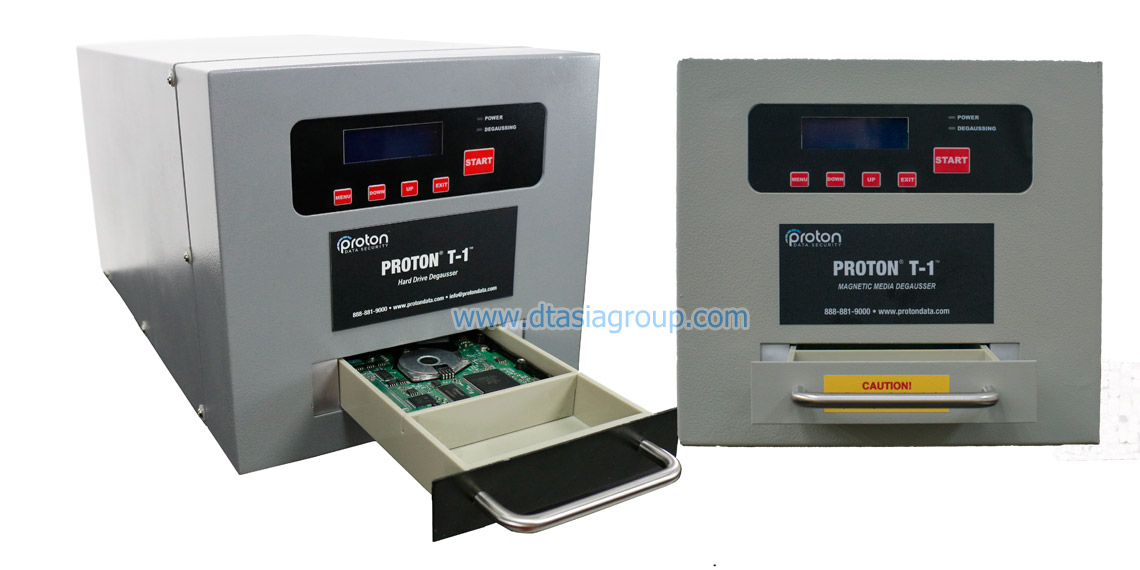 Take a look at our degausser products

One of the simplest ways to permanently erase data is to use software. Hard drives, flash storage devices and virtual environments can all be wiped without specialist hardware, and the software required ranges from free – such as the ‘shred’ command bundled with most Unix-like operating systems – to commercial products.

While different data destruction applications use different techniques, they all adhere to a single principle: overwrite the information stored on the medium with something else. So, a program might go over a hard drive sector by sector and swap every bit for a zero, or else with randomly generated data. In order to ensure that no trace of the original magnetic pattern remains, this is typically done multiple times – common algorithms include Scheier seven-pass, as well as the even more rigorous, 35-pass Gutmann method.

Unfortunately, there are a few drawbacks to software-based data erasure. For one, it’s fairly time-consuming. Then, perhaps more significantly, there’s the fact that if certain sectors of the hard drive become inaccessible via normal means, the application won’t be able to write to them. Nonetheless, it’ll be possible for someone with the right tools to recover data from a bad sector.

Obviously, software-based data erasure also hits a snag when you want to destroy information stored on media that can only be written to once, such as most optical discs. 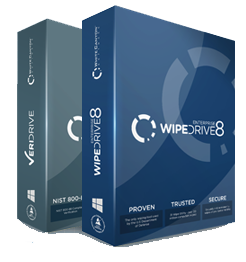 Finally, physically destroying the media is an option, but it is not always as fail-safe a method as it seems. A hard drive can sustain significant damage before the data contained therein is rendered irretrievable. In fact, even if the spinning platters inside are shattered, it’s theoretically possible that someone might put the parts together and recover the contents.

As such, simply snapping a hard drive in half isn’t a suitable technique for permanently erasing end-of-life data. If a company goes down the physical destruction route, it should ensure that the media is shattered into as many pieces as possible – most professionals would recommend using a specialist hard drive shredder.

For devices that use flash memory, the process is a little different. If the memory chip itself is destroyed, the data can’t be recovered. But if it survives, it can be transplanted into another circuit board with a fresh controller chip and the information can be accessed without much trouble.

In summary: it’s easy to assume that physically destroying media is a guaranteed way of securely erasing the data, but that’s not always the case. Doing the job properly is often as time-consuming as any other method and requires no less rigor.

You can use a crusher or a shredder for this particular method of data destruction. 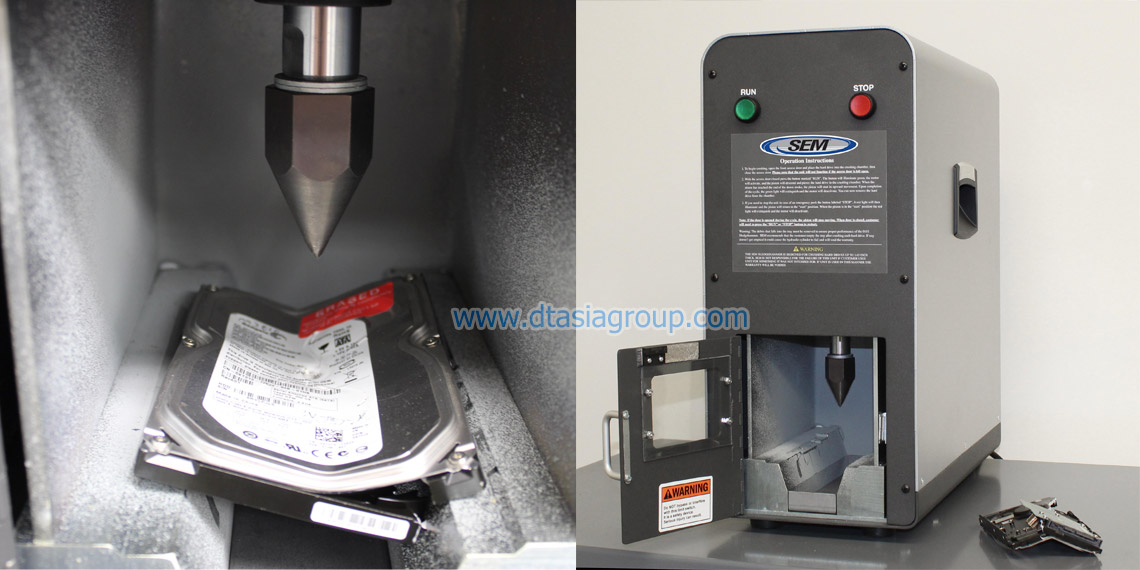 Q: What is Physical Drive Destruction?

To positively prevent data from recovery; disks can be removed from disk drives and broken up, or even ground to microscopic pieces. DoD 5220.22M recommends degaussing followed by physical destruction of the storage medium (the magnetic disks) for data classified higher than Secret. Even such physical destruction is not absolute if any remaining disk pieces are larger than a single 512-byte record block in size, about 1/125″ in today’s drives. As linear and track densities increases, the maximum allowable size of disk fragments become ever smaller. Destroyed disk fragments of this size can be image restored by magnetic microscopy.

Non-destructive data erasure supports wiping and permanently cleaning for all traces of deleted files and folder, administrator documents and other similar files or folders for maintaining computer privacy and enhancing system performance. It deletes all the data, free space, slack space, deleted memory chunks of data even if they’re not existing in a file, removes huge files stored on HDD of Windows OS and any removable media and cannot be recovered or restored by any data recovery software.

Q: What is Sanitization of Data?

Q: What is Degaussing (or Demagnetizing)?

Degaussing is the process for reducing the magnetization of a magnetic storage device to zero by applying a reverse (coercive) magnetizing force, rendering any previously stored data unreadable and unintelligible, and ensuring that it cannot be recovered by any technology known to exist.

Q: What is Coercive Force?

A negative or reverse magnetic force applied for the purpose of reducing magnetic flux density.

Q: What is a degausser?

Degausser is an electrical device or permanent magnet assembly which generates a coercive magnetic force for the purpose of degaussing magnetic storage devices or other magnetic material. In order to be effective in sanitizing data, the degausser needs to be evaluated by an authority (e.g. US DoD, NSA/CSS) to meet the *oersted strength as claimed by the manufacturer.

If the magnetic data storage media such as hard disks and magnetic tapes have been completely degaussed, there will not be any data residue on the hard disk.

Q: What needs to be sanitised?

Q: How then to ensure that data are erased securely?

Hard disk drives can be removed from the computers, smashed, broken up, drilled holes and even shredded to smaller pieces to prevent the data from being recovered. However, even such physical destruction is not absolute if any remaining disk pieces are larger than a single record block in size, about 1/125″ in today’s drives (Note that as the linear and track density of magnetic recording increases the resulting recoverable pieces of disk must become even smaller if all chances of data recovery after physical destruction alone are to be zero).

By physically destroying the outer surface of the hard disks does not ensure that the data are properly sanitized/degaussed. Data can still be recovered by a process known as MFM (Magnetic Force Microscopy) ‏ 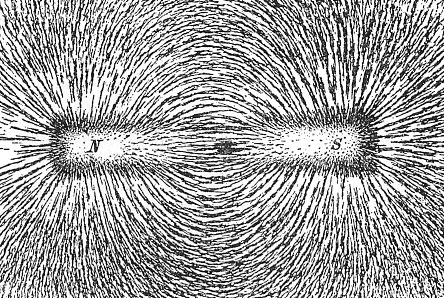 Q: Why the need to ensure that electronic data in storage media are securely erased and destroyed?

By simply discarding obsolete or damaged storage media, traces of sensitive information that are being left behind can be recovered easily. This compromises the security of the confidential data. 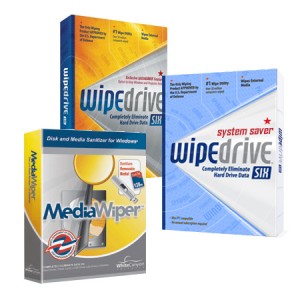 By completely erase your hard drive, it protects your identity and other personal information, when buying, selling or throwing your computer away. It may also improve your system performance.

• All-In-One Device – Hammer erasure tool can not only erase, but also, partition, format and image source data to each of the drives.

The Hammer is a hard disk drive erasure tool. The device will securely erase all data written to the attached drives, up to 4 drives at once.

Both PATA and SATA interfaces are supported. Secure Erase is implemented allowing guaranteed, uninterrupted erasure of all data stored on the media.

If a drive does not support the secure erase command, NIST 800-36 and 800-88 compliant data erase methods are used.

Once each connected device is erased, the user can configure the system to partition, format and image source data to each of the drives.

Once the process has been started, the Hammer will execute each step until complete.

Hammer is a one step tool that will erase all data from a drive and prepare the drive to be redeployed into service.

• Provides peace of mind that confidential data will not fall into the wrong hands.

• T-4 complies with DoD requirements for destroying classified information on magnetic media and is on the NSA EPL. (October 2009) 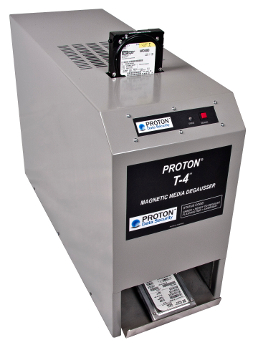 • Manufactured in the USA in ISO 9001 certified facilities.

• Destruction of confidential, sensitive and classified data is in accordance with recognized standards and provides compliance under FACTA, HIPAA, GLB, DPA, etc.

• Confidence that data on high density hard drives is rendered unavailable and unusable.• Minimal training and simplicity of use.• Fits easily into existing operations.

The new Proton T-1.5 is a drawer style degausser that destroys data on hard drives and other magnetic media to help organizations protect sensitive information and stay in compliance with various Government regulations for data sanitization.

The T-1.5 is automatic, light weight and simple to use so it will fit easily into existing operations.

As hard drive and other magnetic media densities increase, the T-1.5 will continue to be the ultimate guard against data loss that can lead to costly data breaches.